Forest Hill, Then and Now 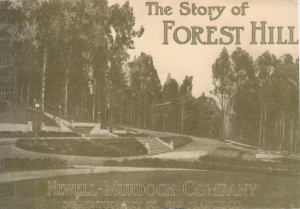 Built upon a hillside that Adolph Sutro planted as forest just west of Twin Peaks in the 19th century, Forest Hill today is a community of some 650 homes located in the geographic heart of San Francisco. Forest Hill was constructed by by developers Newell-Murdoch Company in 1912.  The first home located on Pacheco, was completed in 1914.  Landscaped and heavily treed streets follow the hill’s contours presenting charming scenes of natural beauty that open up here and there to spectacular vistas which may include the Pacific Ocean, the San Francisco Bay, or the Golden Gate Bridge.  Homes representing many architectural styles from Cotswold Cottage to California Modern can be found side by side, harmoniously linked by the plants, trees, and gardens that typify the neighborhood.

Originally situated on the edge of undeveloped sand dunes, Forest Hill’s founders correctly foresaw the city’s growth, and today the neighborhood is located in the midst of some of San Francisco’s strongest residential areas, with many outstanding attractions nearby. Golden Gate Park, the San Francisco Zoo, and the Golden Gate National Recreation Area provide myriad opportunities for outdoor enjoyment, while the DeYoung Museum, Stern Grove Music Festival, UCSF, and California Academy of Sciences offer cultural and intellectual stimulation for young and old.

Seemingly remote from urban hustle and bustle, Forest Hill is just blocks from the charming shops, restaurants and businesses of West Portal Avenue, and less than a mile from both the Chinese markets of Irving Street and the eclectic shops and restaurants of the Inner Sunset. Union Square and the Financial District are just 20 minutes away on the MUNI from the Forest Hill or West Portal stations; and for trips farther afield, 19th Avenue provides easy access to the Peninsula and San Francisco Airport to the south, and to the counties of Marin, Sonoma, Napa and Mendocino to the north.

Always a quintessential family neighborhood, Forest Hill has been home to some of San Francisco’s most prominent citizens. Local professionals have rubbed elbows here with leading political, business and social figures; and the nearby cultural institutions add prominent musicians, athletes and scientists to the mix of residents. Once an exclusive subdivision in the most negative sense of that word, Forest Hill long ago abandoned its founders’ restrictive covenants, and today is proud to count families of every kind among its residents –families representing all the ethnic, social and cultural groups which make up 21st century San Francisco.

(Photos courtesy of Helen Scholten; vintage photos printed originally in The Story of Forest Hill, a sales brochure published by Newell-Murdoch, the subdivision’s developer, now the property of the FHA.)

More historical information can be found in the following link.